One of Hasbro’s biggest names just got even bigger! Monopoly Big Event Slot promises all the thrills of the original Monopoly board game, but in an online slot version. Lot's of fun, but no family feuds with this game!

Monopoly is a world famous board game produced by Hasbro, and has now been brought into life in the form of a new online slot by WMS. Monopoly Big Event offers many extra in game features to keep you entertained and enthralled, much the same as playing Monopoly on a boxing day with family. Minus the arguments of course!

How to Play Monopoly Big Event

Load Monopoly Big Event Slot and you’ll see instantly that WMS/Barcrest have done a great job in keeping things very traditional and very reminiscent of the board game itself. The graphics feature the same ‘traditional’ style colours, which are a little old school, but designed to be that way, to give you that Monopoly feeling.

The soundtrack is perfectly matched and will remind you of playing old school slot machines in your local. Bright primary colours and big neon’s flashes will light up the screen when you win, and the reels feature the typical iconic Monopoly items such as the Iron, Dog and Vintage Car. Other reel symbols feature standard icons such as Q,J,K & A. A great job by WMS, which perfectly gets you in the mood to getting started.

If you play the full 20 lines at the maximum bet of £25 per line & stake then you’ll be playing a whopping £500 per spin which makes it a perfect high roller slot! Think about it, it’s called BIG Event for a reason, because it allows you to bet big and win big! It doesn’t matter if you want to bet smaller, it’s perfectly within the limits for all types of casino players. 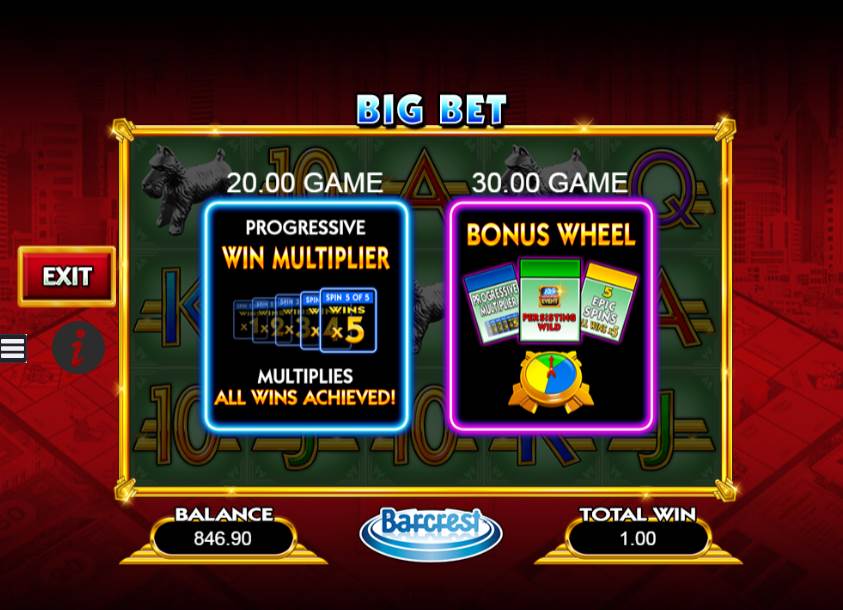 Monopoly Big Event Slot has some great in game features up its sleeve, and is quite interactive as a result.

Features include Multipliers, extra Wilds, Stacked Wilds, Locked Wilds, a Free Spins game and big bet game. We explain them all below, but bear with us, there’s a lot to explain, which only means there’s a lot going on in this slot.

Monopoly Big Event Wilds: The wild symbol has ‘Wild’ written on it and replaces all other symbols except the Big Monopoly Event logo symbol and also the 'In Jail' symbol.

The Big Bet Game: This is where the fun truly starts! At this stage, you’re given 2 options to choose when playing the Big Bet game.

Option 1: This option will allow you to play 5 spins at €20 for the round. Choose this option and you’ll get a (progressively increasing) multiplier on each of the spins, going up to a 5x multiplier.

Option 2: Choosing this option will allow you 5 free spins at a higher rate of €30 for the round. A wheel will appear and you’ll get to spin it to land on one of 3 different game options that you’ll play next. It could land on the progressive multiplier, or 5 free spins game, each with a 5x multiplier. Or, if you’re lucky, you'll get the ‘Persisting Wilds’ option. It’s this feature where you can win some high value wins, a little more difficult to get but when you manage it, it will pay out big.

Monopoly Big Event Symbols: These are both Wild and Sticky and this is where the Big Event Bonus symbol will lock in place for the duration of the 5 free spins. Get 3 or more symbols in view at the end of the 5 spins will trigger the “Big Event” bonus. (Explanation below)

The Big Event Bonus: To trigger this feature you’ll need the Big Event scatter symbols appearing on reels 1, 2, and 5. Also, in addition to this, if they land on 1 and 3 and you get two symbols which are stacked on reel 5, then this will award you with the “Big Event” house sneak preview. If the symbols appear on 1 and 3 with three symbols stacked on reel five, then this will award you the “Big Event” hotel sneak preview. If you’re wondering what the main difference between them is, then the house sneak preview reveals the chance card positions of three house wins, while the hotel sneak preview reveals the chance card position for the hotel wins. All slots have instructions within the slot itself if you need to look mid-game play to check how to get the most from the slot and what you should be looking out for. 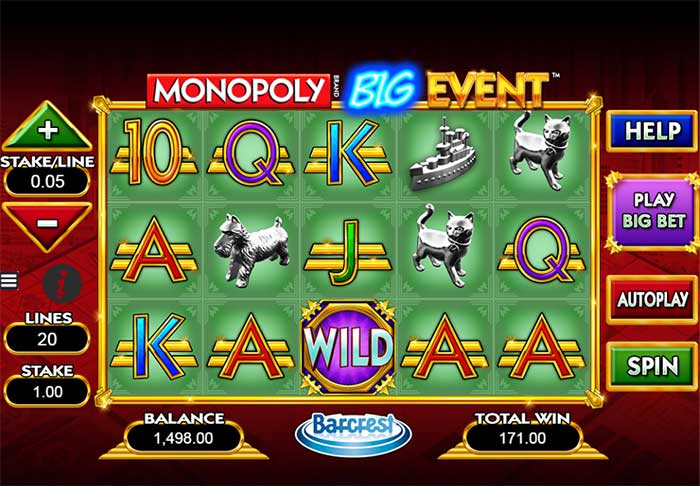 Monopoly Big Event Mobile Slot is just as fabulous on mobile phones and tablets as it is on the main desktop version. WMS has adapted the slot rather well and it doesn’t lack any features or functions that the desktop slot offers. Hugely entertaining on either, we’d recommend Monopoly Big Event Mobile Slot on any tablet which we think is the perfect slot playing slots and online casino games. It looks great, sounds great, is fun to play and is easy to play on all mobile touch screen devices.

What Do We Think?

Monopoly Big Event is like playing this cool online version of the board game, in an online casino version, only you’re winning real money, and not Monopoly money (that’s what we’ve all really ever wanted anyway, isn’t it?). The RTP (What is rtp %?) for Monopoly Big Event is said to be a very high paying out slot, way above any NetEnt slots at around 98% which also is a very big factor when decided which slot to play next.

Monopoly Big Event is called Big Event for a reason, so try it out for yourself at a recommended casino which offers WMS software and also get only the best casino bonuses and perks for doing so.